For my Crafty Hazelnut's Patterned Paper Challenge month card I made a special card for my friends Pearl and Wendy's grandchildren. The Canadian Mint came out with a special limited edition of our two dollar coin in 2019 to honour the WWII servicemen who serviced during D-Day (June 6,1944). These coins were only available to purchase in a roll of 25. So I decided to purchase a roll and display them in a card along with information about D-Day. September marked the 75th anniversary of the end of WWII. I used Stampendous's stamp and dies called Pretty Poppies. I coloured them with Copic Markers. I cut 1 1/2" circles from the front patterned paper. The coins were put into covered coin holders to show both the front and back of the coins. Inside the card, I included the write-up.
The background papers have metallic flowers and they don't always photograph well for me. 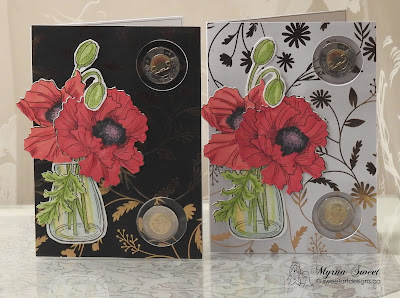 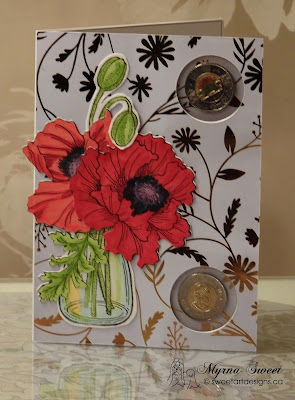 As an added note: both my Mother and Father serviced in the Canadian Army in World War II. My mother was a driver/CWACS (she never got to go overseas because you had to be 100 pounds and she couldn't gain the weight!) and my father worked in stores. He was in London when Germany surrendered. He had the choice of staying on the help with the cleanup or signing on for the "Pacific Conflict". He chose the latter but by the time the ship hit Halifax, Nova Scotia, Canada, Japan had surrendered so he was sent home. When the men come home they had a decision to make. They could have a world time house (1 1/2 storey home), go the school, or work for the government. My mother being just a woman got nothing. My father became a Professional Engineer (Mechanical ENG) and joined the Reserves where he served as a Captain.

Please join us. Use those patterned paper you have been collecting!
Posted by sweet art designs at 00:00